Over the past year, there has been TONS of buzz regarding the Mentality Nail Polish scandal, which left many customers with Onychomycosis (nail fungus) and chemical burns!  Adverse reactions included nail lifting, burning, redness, and pretty much just the entire nail dying and falling off. X_X
One of the most disheartening (and scary) part about this whole scandal was that these products were praised as a 5-Free nail polishes! We tend to blindly trust nail polishes marketed as such because they are free of 5 of the worse chemicals usually found in nail polishes: Toluene, Dibutyl Phthalate (DBP), Formaldehyde, Formaldehyde Resin, and Camphor. However, just because they may not give you cancer in the long run doesn't mean they are completely safe!
Long story short, this is another example of how scary it is that the FDA doesn't require companies to test their products before selling them! To make this all even more pathetic, Mentality Nail Polish complained their lack of testing was due to the fact that it was too expensive to do (though it was later pointed out that it would have been only ~$1000)!
In general, when shopping for any sort of cosmetic that will be absorbed into your body, try to focus on companies you trust. Larger companies have more resources (and more to lose if something goes bad), so they may do a better job at testing for safety. However, some of theses massive corporations will still try to cut corner to increase profits. Indie companies on the other hand, like Mentality Nail Polish, will also cut corners due to lack of resources and experience. Personally I try to find the companies in the middle: large enough to have good resources, but not so big they only care abut the bottom line. As always, try to choose a company that is dedicated to it's customers and it's cause.
Here are some of my (personally-tested and approved) favorites: 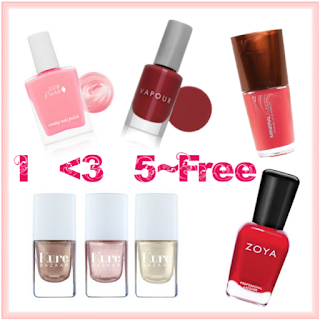